Yesterday the 2014 VMAs took place, the annual awards show organized by MTV in the United States to reward the year’s highlights in the world of pop music.

Beyoncé was the biggest winner of the night and took the “astronaut” for best collaboration for “Drunk In Love” recorded with her husband Jay Z and two more awards: the clip with a social message and the photography, both for ” Pretty Hurts”. Miley Cyrus’ “Wrecking Ball” was named the best video of the year.

Now let’s get down to business, the looks of the night: 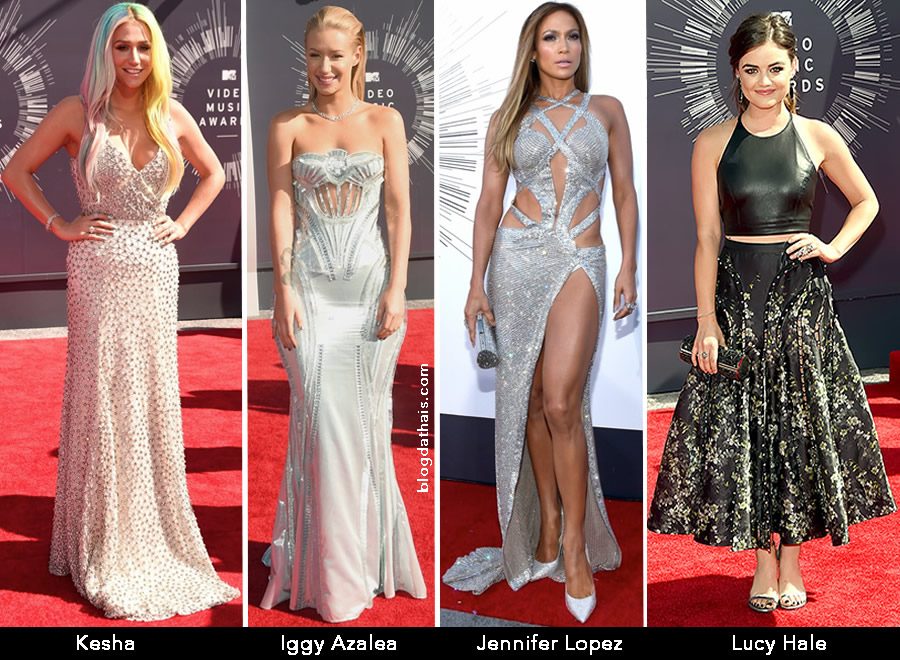 Kesha made the right choice, the dress was beautiful and very classic, just the colored hair that I don’t like, but she won points since her style has changed a lot and for the better, don’t you think? !

Iggy Azalea looked very pretty, although this dress is not my style.

JLo arrasouuuu, my God what a dress right?! Super sexy and her face!!

Lucy Hale was so cute, I loved the skirt and the crop top, I just think the skirt could be about 5 fingers shorter, because it flattened the silhouette a bit.

Beyoncé for me was the best of the night, besides the trophies she rocked the black divo dress!! It was beautiful and everything was right!!

Kylie Jenner was also beautiful, with this little black dress! The dress was nothing special, but the neckline and slit made the look sexy without being overdone. I just think she’s aged a little, because she’s only 17 and looks 30!!

Kendall Jenner was beautiful, as he is very thin, tall and has small breasts, the transparency was chic and elegant without being vulgar.

I loved the look of Jessie J, I love these loose dresses and I think the neckline went really well with the model and production!

Miley Cyrus got the set of high-rise and cropped pants right, it was very cool, modern and let’s agree that the person has style right?!

I loved this Balmain by Kim Kardashian, but I didn’t really like her! I know some people will want to kill me and they won’t agree, but I think it’s made vulgar because of the size of her breasts. I think you’ve noticed that I don’t post her looks a lot and that’s exactly why, in my opinion (everyone has an opinion!) she always exaggerates her cleavage and I find it vulgar.

Nina Dobrev was powerful, the dress was beautiful and surprised me, I thought she was “cheesy”, but I’m noticing a change and I’m loving it!!

Victoria Justice rocked it!! I loved this super different black skirt with the white cropped. 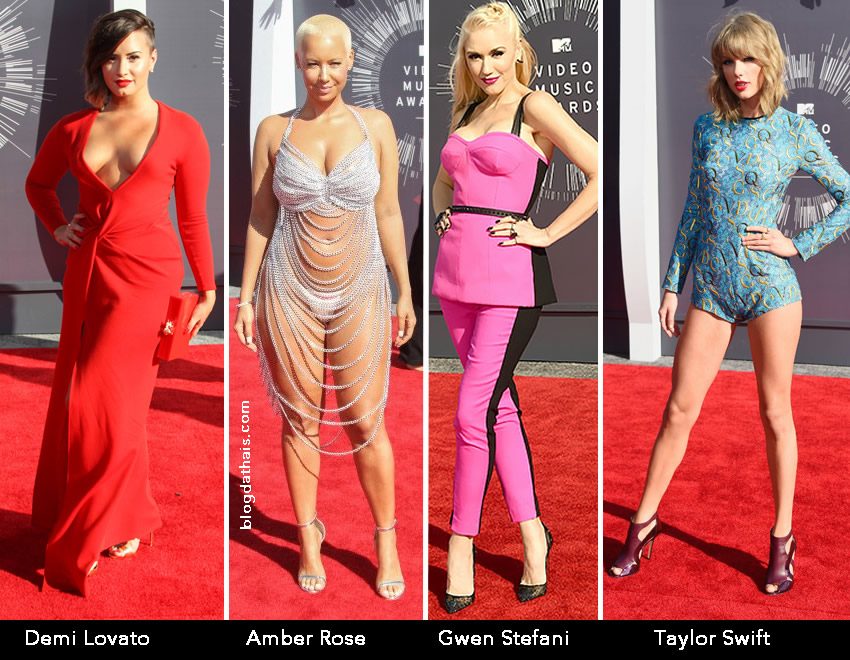 Starting with Demi Lovato and this horrible, super exaggerated cleavage that made her body look awful!

Amber Rose was almost naked and these chains, what do they mean, I don’t even know what to say….

Gwen Stefani wasn’t too bad, in fact I even liked the pants and the peplum and thought about taking her out of this selection several times, rsss…. but I didn’t like the colors and I thought she could have chosen a more appropriate look, in the end she was rsss…!

Guys, what happened to Taylor Swift? She managed to be one of the worst dressed of the night!! Lucky for her, Amber Rose was way worse lol…

Ariana Grande totally missed the look and went overboard with the leather!

Rita Ora exaggerated the huge slit, the huge neckline and the back out, that is, a lot for a single look and on top of that it was red!

Katy Perry was dressed as Britney Spears and the imitation was great, but the look was not pretty.

No comments to show.